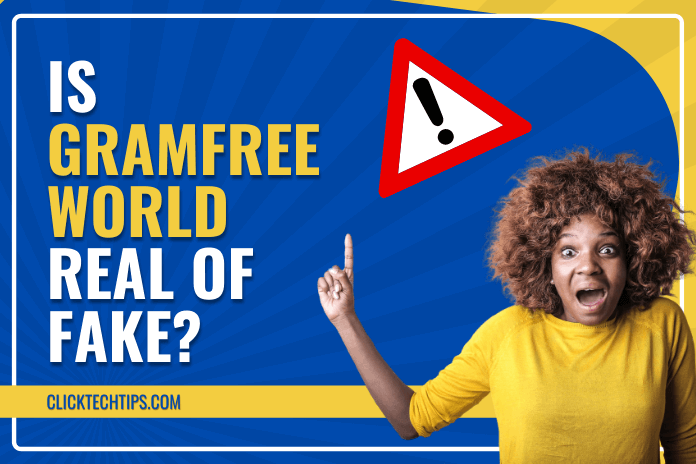 Most people have heard of GPT(get paid to) websites where users get an in-game currency for completing easy tasks.

GramFree is a GTP website where people can earn Grams in exchange for simple tasks. Examples are inviting new people to the website, signing smart contracts, watching videos, depositing money, and entering an everyday lottery.

GramFree world is similar to most GPT websites in that its sources of revenue are selling people Grams and ad revenue. So, what is GramFree? Let us find out!

Now, more and more people are seeking online earning opportunities to boost their income. They have ample opportunities. As there are several fake websites, people think a lot before joining a website. In the process, many people miss out on real opportunities. What is GramFree all about?

As mentioned above, GramFree world is a website that promises people earnings without any investment. The good thing is that even if it turns out to be a scam, people are safe as they have not invested anything. People do have to spend some time to earn money on the site, so they within their rights know if Gram free world is fake.

Is GramFree World Real or Fake?

The website is gaining popularity all over social media, with several people joining and even making several dollars. Users don’t need to click on ads or fill surveys. There is no Gram free world download app. Many a Gram free world review is present on the Danish consumer review website Trustpilot. This review website hosts numerous reviews of businesses all over the world. Some 1 million reviews are posted on this website each month. The user reviews of GramFree present on Trustpilot are mixed.

Several reviews say that the site is very user-friendly, and people can find information that interests them easily. In other words, beginners can easily understand and access the website. Several speak highly of the website’s practiced and prompt support for any questions that arise. Several users say that they have earned for quite a few months on this website and have a stable passive income now.

Despite all these great reviews, there are some negative reviews. Most of these negative reviews are about the pending of claimed withdrawals of various grams. Most of these people with pending amounts have requested Team GramFree about it. What is the best way of finding out whether GramFree world legit or a scam? The answer is by trying out the website. Given that joining is free, people don’t have anything to lose.

Is It Possible To Earn With GramFree World?

So, how does GramFree work? After a person opens the GramFree website, he can sign up with his Facebook or Gmail. Next, the GramFree Dashboard opens up. Now, there are quite a few ways to make money on the site. We are going to discuss the several ways by which earning is possible in Gram free world.

People can earn on GramFree by collecting the Gram. However, there are several ways that they can assemble. Among them is the first referral. Here, a person invites another person. On each such invite, he gets 5 grams bonus. He gets the 5 grams bonus when the person he invites reaches a minimum of level 2. The reason for this rule, as given on the website’s T&C, is that they are keen on monitoring if the invite is fake or not. GramFree is like any online platform that is keen on growing and experiencing great levels of traffic. Thus, a referral is recommended.

What is another way that a person can earn on Gramfree? He can earn by knowing where he should play his next roll. After some minutes, he will get a chance to roll, and he gets 0.1 grams to 1000 grams bonus, which equals 0.02 cents to $2000. The person wins every time he rolls the spin, and he does not lose.

The Fourth Way of earning grams on this platform is by completing a level. For each level that a person completes, he can get 5 grams bonus.

Another way of earning bonuses is by watching and making GramFree videos. A person gets 5 grams bonus for making a video. By seeing a video for 60 seconds, he gets a 0.1 Gram bonus. Five videos will be available in his account every day.

Another way of earning is with express smart contract. It’s the fastest method of making more grams. It also requires less work. What does a person need to do? He should not log in to his dashboard for a minimum of three days. After that, when he checks his email, He will see an email saying, “new express smart contract available.” Clicking on the link will take him to his dashboard account. He should visit the smart contract and sign it. He will immediately earn 10 grams.

There is, of course, the 10-gram sign-up bonus. A person gets 10 grams on signing up on the platform.

People can also earn by creating a promotional video on YouTube and submitting it for GramFree’s appreciation. A video that matches the platform’s requirement and is approved will fetch the person 5 Gram.

How to use GramFree world?

People can register on GramFree world for free. Registering is very easy and takes some minutes. People get 10 Gram coins on signing up. It’s the sign-up bonus. Gram corresponds to the currency which users can later convert into real money.

Once a person has registered, he can earn as many Grams as likely. What does he do after registering? He visits the menu and clicks on Videos, Free, Referrals, or Smart Contract as these four quickest ways of earning and receiving money within two months. The person can speed up his earnings by referring a maximum of 5 people every day and seeing or uploading quite a few videos.

Once he reaches 500 Grams, he is free to withdraw his money through several means. They are MasterCard, Bitcoin, PayPal, Visa, Payoneer, American Express, and Payeer.

The steps for withdrawing through Bitcoin are:

People who can keep day-to-day updates on the website have a chance of earning a good amount.

Do We Need To Invest In GramFree World?

All the above ways of earning with GramFree are free. People won’t be asked to invest a penny on this platform. People can withdraw the Grams they earn anytime in Bitcoin. They can withdraw it with their credit card. They can also withdraw to their Payoneer, PayPal, Payeer account, etc.

This platform can be a great opportunity for people who stay home most of the time or people. It’s also a good prospect for people who could do with some extra money.

Is It Safe To Use GramFree World?

GramFree is a genuine website. However, it isn’t owned by any registered business, and it isn’t a registered monetary investment website. However, as we have stated before, there are several positive user reviews on the Danish consumer review website Trustpilot. There are also some negative reviews here.

All this is likely to take him at least 60 days.

However, signing up on the platform is free, and people don’t need to spend much time doing the activities here. Thus, one can always give it a try.

Consumer review websites like Trustpilot and Trust Mamma have several user reviews of GramFree. Reviews on Trust Mamma are mixed. They say that the website pays. Several of the positive reviews are of people who had been invited to try out the project by their friend. They recommend completing all of the tasks to make the required withdrawal amount faster. Some people who have given positive reviews have given their links for people to register.

Many people are keen on working from home. They are scared that they will have to do some technical stuff or some daunting coding things. There are several websites where they can earn by doing simple tasks. We have already discussed GramFree. GramFree isn’t the only website where people can earn by completing simple tasks that do not take much time for free. There are several apps/websites like Gram free world where people can register for free and start earning by completing some simple tasks. Some of them are Amazon MTurk workers, Swagbucks, InboxDollars, qumy, etc. The advantage of these websites is that people can make their own schedules and make their own hours.

Tips to earn money online on Upwork in 2015

Earn money online by freelancing on SeoClerks and oDesk in 2015